The prompt this week is taxes. Instead of writing about property taxes, I have chosen to write about an ancestor I found very taxing to research.

Archie Edward Gilkerson was my great great grandfather. For quite a long time, that was about all I knew about him. My great great grandmother Grace was his second wife. Census records showed he was born in Illinois somewhere around 1865. But where in Illinois? Who were his parents?

Archie had lived in several New England states, so I wasn’t entirely sure where he died. I found an online index of Rhode Island deaths and burials that showed Archie had died 15 November 1925 in Coventry, Rhode Island. Since he had been dead more than 50 years, I was able to get a copy of his death record from the Town Hall in Coventry. I grew up in Coventry, and still live nearby, so it was no hardship to go there for the record. I stopped in after work one afternoon, and the clerk made me a copy. I waited until I got home to look at it. Place of Birth: Springfield, Illinois. Parents: blank. Ugh! No parents listed! But, I now knew he was from Springfield. Or was he? I guessed that the information was provided by his wife. Did she know for certain where in Illinois her husband was from, or did she just name the capital city?

My next step was to search for his obituary. I checked the local paper that served Coventry and the neighboring towns at that time, and found no obituary. The statewide newspaper is available on microfiche, but only the Providence Public Library holds all years. Most local libraries only have recent copies, or have done away with microfiche all together. I love looking through old newspapers, and need to set aside an entire day for it – even when I’m only looking for one specific thing. I am so easily distracted by all the articles. I especially love all the gossipy bits. “Mr and Mrs Jones of Cranston have returned home following two weeks in Connecticut visiting their daughter Julie, formerly of this city.” Before I know it, hours have gone by and I’ve only gone through a few months of papers… But I did find Archie’s obit. There were no details!

Having struck out locally a few times, I decided to contact the vital records office in Illinois. I explained I was looking for a birth record from 1866. The clerk’s response stunned me. “We don’t have records going that far back.” THAT FAR BACK?!? What the…? It was that moment that I realized how lucky I am that most of my ancestors are from New England. I have been spoiled by access to records dating back to the Mayflower’s arrival.

Most genealogists love wandering through cemeteries and I’m no exception. A girlfriend and I have a running joke about her father going to the cemetery to talk to dead mémères. I don’t usually set out to talk to dead grandmothers, but I will admit to saying hello and introducing myself when I visit the grave of an ancestor for the first time. I don’t really think they can hear me, but don’t want to be rude just in case. One summer day I was wandering through my favorite cemetery and stopped at Grace’s grave. Grace died in 1914 at age 30 having been married to Archie for only 5 years. I decided to have a little chat with her while I was there. I told her I was trying to find more info about Archie. I told her I knew she hadn’t been married to him for too long, but surely she must know more about him than I did. I told her I enjoy research and wasn’t looking for an easy answer. I said that I didn’t expect her to give me the information, but would appreciate a hint pointing me in the right direction. I left the cemetery and went about my day. Ran errands and other mundane stuff. I didn’t give Grace or my conversation with her another thought. Later that night I realized I hadn’t checked my DNA matches on Ancestry recently. I logged into my Ancestry account and saw a green leaf hint on my family tree. I clicked on it and was surprised to see a hint for Archie. It led me to the record of his marriage to his first wife. It showed he was born in El Dara, Illinois (not Springfield!) and listed his parents names. It was then I remembered asking Grace for a hint. I really don’t think that Grace provided assistance from beyond to grave, but it’s certainly a coincidence. I went back to the cemetery the next day to say thanks. Best not to seem ungrateful just in case… 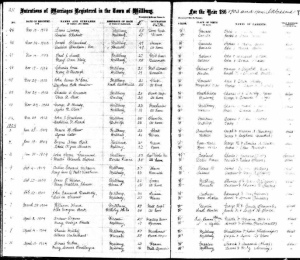 On the marriage record, the father’s name was clearly Robert. The mother’s name began with an E and it looked like the maiden name might be Brothers. I called the Milbury, Massachusetts Town Clerk. I told her I had found an image online of the marriage record, but couldn’t quite make out the name of the groom’s mother. The original record was very clear, and the clerk said that the mother’s name was definitely Elizabeth Crothers. Woo-hoo! I finally got the information I had been looking for!

It was most frustrating because he is such a recent ancestor. I knew the information had to be out there somewhere. I have other brick walls, but Archie was by far the most taxing to break down.