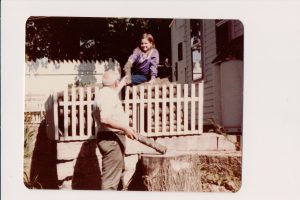 While this photo is not a favorite, it is so evocative of a place and time that I had to include it. The photo is of my dad’s adoptive father and I stacking wood. I loved spending time with my grandfather, even if it included manual labor. When I visited my grandparents, there were no neighborhood children to play with, so I was usually found in the house, curled up with a book. I always preferred a good book to running around outside. Most kids were sent to their rooms as punishment – I was sent outside to play… But whenever I spent time at my grandparent’s house, I was my grandfather’s shadow. Constantly bugging him and asking if I could help with whatever he was doing.

Goff Earl Hawkins was born in East Providence, Rhode Island on June 17, 1913. He was the first child of Gladys Ida Goff and Earl Raymond Hawkins. Gladys, Nan to her grandchildren and great-grandchildren, lived on her family’s farm in Rehoboth, MA when she met Earl. Earl lived in the neighboring city of East Providence, RI. She caused quite a stir in 1912 by marrying a fella from the city with indoor plumbing! Growing up, my grandfather had the best of both worlds. He spent a great deal of time at his grandfather’s  farm, while also enjoying the benefits of the city. Movies and soda fountains were the prime entertainment close to home. Time on the farm centered around roaming the fields, swimming in the nearby pond, and tending livestock, including his favorite horse, Nobby.

In August of 1913, two month old Goff and his parents were involved in a motor vehicle accident. Earl was driving the horse and buggy when an automobile skidded into them. Nan said my grandfather was thrown from the buggy, and she was afraid that if he had survived the fall, he would be injured by the nervous horse. Luckily, he escaped with just a few bruises. The buggy was wrecked, but “the machine was not damaged to any extent”. 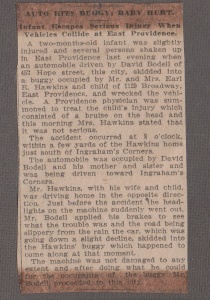 Like many young men of the time, Goff never finished school. He completed the third grade and the family decided he was needed to help out on the farm. His grandfather had an egg business, so Goff mostly tended to the henhouse and rode with his grandfather delivering eggs. Goff’s father was an automobile mechanic and Goff learned to drive as soon as he could see over the steering wheel. He was able to take over his grandfather’s egg deliveries when he was just 13 years old.

Earl’s sister, Bertha and her family lived next door to them in East Providence. My grandfather and his first cousin Norman were only a few years apart in age. In 1931, Norman began dating a girl, Eva, who lived in Hope, RI. Since Norman did not drive, and Eva’s parents weren’t keen on her going out with a boy unchaperoned, it was decided his older cousin, Goff, would drive and Eva’s sister, Hazel, would also go along. Both couples hit it off. Norman and Eva were married in 1937 and Goff and Hazel followed suit the following year.

Now a married man, Goff moved to Hope and began a job in a rubber manufacturing plant. His new bride’s aunt was Postmistress, and they rented an apartment above the Post Office. He was drafted into WWII and spent the bulk of his service in India. While he was in India, Hazel bought the house where they would spend the rest of their lives. She had been earning money as a mail carrier while the regular postmen were off fighting in the war and had earned the funds for the down payment herself. Once he was discharged, he returned to a new home, ready to start a family. 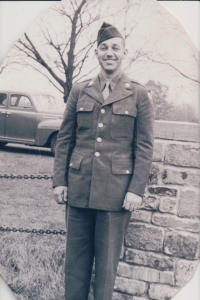 Unable to have children, they chose to adopt. They adopted a daughter, Judy, in 1949, and a son, Duane, in 1951. When the children were young, Goff and Hazel built a summer home on leased land. The summer house was on a pond in Coventry, a whopping 8 miles from their home in West Warwick. Duane and Judy spent idyllic summers swimming, waterskiing, and boating. The extended family seemed to spend the entire summer there. There was always something to celebrate. Birthdays, anniversaries, bridal showers, baby showers, or even just cookouts for no reason…

As I got older, my grandfather shared his family history with me. His family history was so interesting! Several ancestors came over on the Mayflower. Another ancestor was a drummer boy in the Revolutionary War. I was interested, but didn’t pay attention as closely as I should have. Since my dad was adopted, I didn’t feel these long dead ancestors were really ‘my people’. I wish I could go back and kick myself! I remember when he was in his late 80’s, my grandfather showed me some family documents he had. I carefully unfolded his parents marriage certificate.

I watched the wheels slowly turn…

“That son of a bitch! Taking advantage of a young girl like that!”

I tried explaining that it takes two to tango and he would not be here otherwise, but he didn’t want to hear it. I’m fairly certain that if Earl were still living, he would have gotten a punch in the nose!

Goff lived to be 93 and passed away on 28 April 2007. Hardly a day goes by where I don’t find myself thinking about him or remembering a life lesson he taught me. Mostly car maintenance or the importance of shutting a light off when leaving a room… 🙂

View all posts by ellenlee

One thought on “Week 2 – Favorite photo”